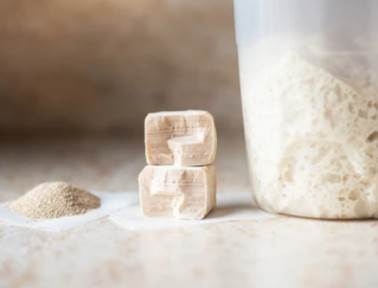 Leavening agent is a substance that is added to the raw dough or batter to fluff and soften the final product. The method is to fill the dough with gas, of course, in theory it can be achieved by mechanical means, but in practice it is more often done by biologically active agents, or by using chemical factors and triggering a reaction with heat, moisture or acidity to produce carbon dioxide. When the dough or batter is well mixed, the flour and water are well mixed to form the mother, then the starch starts to gel and the air bubbles retained in the surface form the cavities.

Biological leavening agents are leavening agents that use some harmless microorganisms in the fermentation process. Yeast or brewer's yeast species is one such agent that produces carbon dioxide when added to food.

Chemical leavening agents are mixtures or compounds that release gases when they react with each other, with moisture or with heat. Most are based on a combination of acids (usually low molecular weight organic acids) and bicarbonates. After they have worked, these compounds leave behind chemical salts. Chemical leavening agents are used in quick breads and cakes, as well as in cookies and many other applications where prolonged biological fermentation is impractical or undesirable.

Leavening agents can be added to doughs and batters to make them ferment well.

They can be added to baked goods such as cakes, quick breads, cookies and pancakes, fermented doughnuts, and Danish pastries.