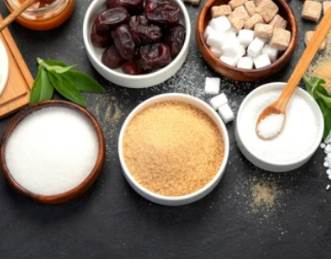 Sweeteners are common additives in the production of food, mainly used to enhance the sweetness of food, improve food quality, rich food flavor, the auxiliary effect is significant, but some food sweeteners have non-nutritional, low energy, high sweetness characteristics, if excessive addition will be harmful to human health.

Nutritive sweeteners are mostly natural sugar alcohol sweeteners, which are low in energy and slightly less sweet than white sugar, and do not cause high blood sugar, dental caries and other health problems.

(1) Mannitol. At this stage, it is mostly used in the production and production of jams, candies and other foods.

(2) Sorbitol. Sorbitol is extracted from blueberry, with a cool taste and about 50% sucrose sweetness, and has a certain tooth-protecting effect, which is more common in candy food.

(3) Xylitol. Xylitol is extracted from plant hemicellulose, xylose, cool in the mouth, about 90% of sucrose sweetness, more common in confectionery food.

(4) Erythritol. Compared with other nutritional sweeteners, erythritol has a higher sweetness, about 3 times the sweetness of sucrose, and is not harmful to the stomach and intestines, and has a dental care effect, and is more common in candies and beverages.

(5) Maltitol. Maltitol is produced by hydrolysis of maltose starch and further hydrogenation and reduction, and its sweetness is similar to sucrose, about 85% to 95% of sucrose sweetness, with the effect of promoting calcium absorption and preventing dental caries.